Government does back flip when announcing changes to super

15 Sep Government does back flip when announcing changes to super

Today the Government announced significant changes to the proposed superannuation reforms, providing clarity and certainty for financial planners and clients around Superannuation.

The news that the retrospective $500,000 lifetime non-concessional cap has been removed is something the FPA has been actively advocating for on behalf of members since the Federal Budget.

Below are the key proposals: 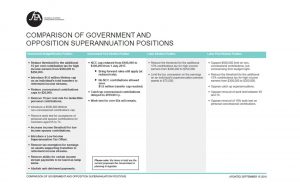 Please contact one of our advisers on 08 8373 7277 with any questions or to make an appointment.